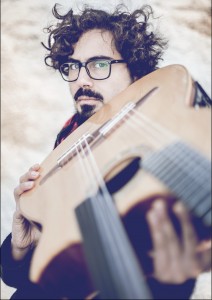 Born in Tehran, Iran. His musical activity began in the city of Babol by the Caspian Sea, when at 13, he began to play the piano. Guitar was the next instrument he picked up two years later to learn classical and flamenco rudiments, which later turned into the self-teaching of Jazz guitar methods. A turning point in learning rudiments of jazz was when he attended Vahagn Hayrapetyan’s jazz workshop held in Tehran. The native music of Iran was his point of interest as well, as he was also learning to play the “Tar”; a traditional Iranian instrument. He had gained experiences through working in various line-ups along traditional and ethnic musicians as well as a number of jazz musicians in Tehran. In 2009 he moved to Europe and produced the first “Mahan Mirarab Trio” album title “Persian Side of Jazz”, which he recorded in Vienna. This work included pieces played on a fretless guitar which provided Mahan with the ability to interweave western music with microtonal music of the middle east. He had successful tours in various European cities, as well as the US, and his hometown, Tehran.