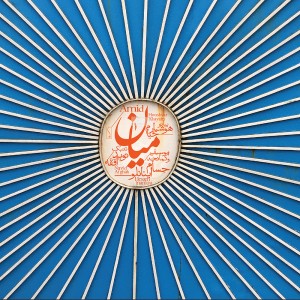 I composed the whole piece initially. After finishing the composition and recording it, I left it in the expert hands of Hooshyar Khayam. Together we listened repeatedly and reviewed the concepts and the climaxes of the music. I knew Khayam from his album “ All of You”. I was familiar with his musical emotions and I saw a passion in him that would allow me to trust him with “ Amid”. After recording the piano for the first track, I was reassured of my choice and the trust I put in him. Hooshyar was on the right path. For the second and third track I attended the recording sessions as a supervisor. This time the ideas were more developed. I listened to the recordings again one month later. I edited some of the piano parts with a new perspective. There were some concepts in Khayam’s playing that allowed for a more colourful flow in the music. However, things got more exciting when Navid Afghah agreed to be a part of this project. Afghah is a composer with new ideas and visions. Ofogheh’s musical perspective captured my interest from the beginning of our collaboration He has a unique outlook towards rhythm and the musical arrangements. In other words, Afghah brought this project to its sentimental peak. Each one of his beats are created thoughtfully. The colourful tones he created from the Tonbak are both fascinating and intriguing. Collaborating with these two friends has been a very pleasant experience. “ Amid” is presented in three sections with each section reflecting an independent story. The names of the tracks are meant to direct the listener to the mindset of the composer.

TO BE AND TO SING

TO BE AND TO SING